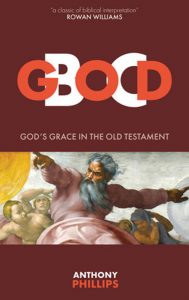 This is a refreshing book which opens up the Old Testament in an absorbing and original fashion. Phillips has revised his thesis, originally published in 1977, to show how God’s grace – a word absent in the OT – permeates the history of God’s people. His text has to be read theologically. Although it is founded on profound scholarship and knowledge, there are no footnotes or references. Phillips sometimes makes sweeping statements that cry out for justification. He alleges, for example, that there is no evidence for Israel’s presence in Egypt; and does not believe in the independent source of the Pentateuch known as E. But in contrast there are some beautifully wrought interpretations, especially on the 8th century prophets, Amos and Hosea. He is also fascinating on Ezekiel, whom he regards as the father of Judaism (rather than Ezra). But, in perspective, the scholarship lying beneath this book matters less than the driving force of the message: that God’s love for humanity is unrestrained, and visible throughout the Hebrew scriptures despite the violence of the age and the formalities of the law. God BC is a provocative but highly recommended read.