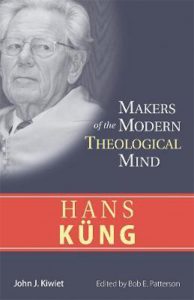 Continental theologians tend to write big books. The German Catholic Hans Küng exemplifies this, as in this re-issue of Kiwiet’s sympathetic, pithy and critical survey. Most of us will know of On Being a Christian. Not all that he was dismissed by the Pope from his official Catholic teaching role in 1979. Why? For being a scourge and articulate critic of out-of-date and untenable aspects of Catholic belief and practice. ‘Faith in the living Lord should coincide with concrete action’ within the Church and in secular society. He was an ecumenist who sought to bring Catholics and Protestants closer together, healing the centuries old rift of the Reformation. He opposed the Pope’s infallibility, writing that the Church was best placed to be without defect, but not the Pope. He was a brave searcher for the truth, critical of the Vatican hierarchy’s handing down the faith from above, and of those in power who protected the status quo and blocked change coming from below. His hopes rose during John XXIII’s papacy but then were dashed. He remains a champion of worshipping men and women, Protestant or Catholic, and those outside the Church.