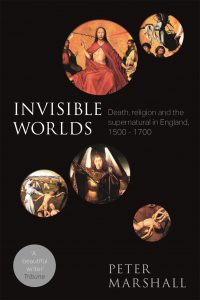 Invisible Worlds: Death, religion and the supernatural in England 1500-1700

My first reaction to this collection of essays (divided into two parts – one heaven, hell and purgatory; the other angels, ghosts and fairies) was: ‘Angels and ministers of grace defend us!’ (Hamlet I iv). The discussion of guardian angels from a Calvinist, rather than a Lutheran perspective, is intriguingly open-ended,

inviting readers to draw their own conclusions. The discussion of Purgatory was particularly fascinating. Its removal as a believed post-mortem destination, long-underpinned by dogma and then-contemporary literature, had a profound, unexpected impact: ‘…with the despising of purgatory, they began little to regard hell’ as one scribe put it. At modern funerals, the minister says: ‘in sure and certain hope of the resurrection…’ regardless of whom is being buried/cremated and what they did/did not believe. Are these comforting words only that, or should the church be more open, more honest about heaven and hell? This book provides an eloquent starting point for such a debate. Marshall has written an accessible masterpiece providing the key to understanding the collective intellectual and spiritual mindset post-Reformation, and its continuing influence on post-modern
western Christian thought.