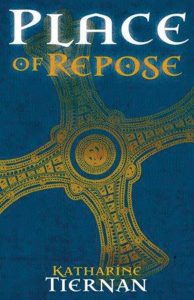 This interesting, well-crafted historical novel imagines the detail behind an epic series of journeys by the monks of Lindisfarne: a mission to preserve the relics of St Cuthbert from the depredations of the heathen Danes who were destroying churches and monasteries across Northumbria in the late 9th century. From Lindisfarne, the saint was transported west to Carlisle, lodged temporarily near Derwentwater, was shipwrecked during an abortive journey to Ireland, and eventually travelled back to northeast England to a shrine at Chester-le-Street.

Two characters dominate the narrative – Stiltheard the restless, stuttering novice and Eadred, Abbot of Carlisle, a sybaritic but faithful priest who acts with astute diplomacy to bring peace to the region. Both are influenced in contrasting ways by visions of the coffined saint, who is present as a mysterious guiding presence throughout the journeyings. The novel describes violent, turbulent times, but is ultimately about reconciliation and restoration, brokered through divine spiritual interventions. It will delight all who are interested in Saxon history and Northumbrian Celtic Christianity.