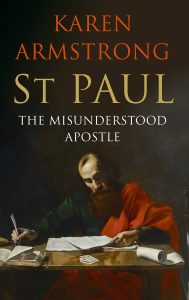 This is a short and very readable biography of St Paul for the general reader. It is, however, written on the basis that Paul only wrote seven of the letters attributed to him and that the Acts of the Apostles is unreliable. As a result, for example, the events after Paul’s arrest in Jerusalem, including his journey to Rome, which are covered in the last seven chapters of Acts, are dismissed as largely or entirely legendary. Armstrong has a tendency to state rather than justify her opinions. For example, the statement that ‘Luther’s signature justification by faith’ was ‘quite alien to Paul’s thought’ is not validated in the text. Given the frequent references to ‘faith’ and being ‘justified’ in both Romans and Galatians, this would seem a serious omission.
Although the view of Paul in the book is mostly positive, he is still portrayed at the end of his life as having largely failed in what he was attempting to achieve. Given this failure, the book does not, in my opinion, adequately explain how the church both survived Paul’s execution and Jesus’ non return nor why, in the light of this ‘failure’, Paul’s letters should have been kept and treasured. Even though I disagreed with much in the book, I still found it interesting.