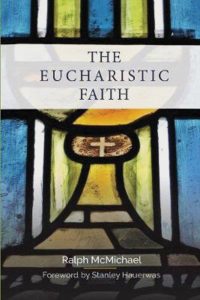 This is the first of a projected series of volumes seeking to recast the whole of Christian theology from the perspective of the Eucharist. The author’s logic is hard to fault, and if his project has any success, I suspect it will generate lively and influential debate. Although the book is densely written and academic, the basic idea is straightforward. If you take seriously the core Christian belief that Jesus Christ is God incarnate, and believe that the Eucharist was instituted by Jesus as a pattern for us to follow, then its centrality cannot be denied, and must affect every aspect of theology. There is something here to challenge the assumptions of all Christians, whether Catholics who perhaps cling to outmoded models of what is meant by ‘real presence’ or Protestants who regard a communion service as not much more significant than a service of morning prayer. The tone of the book is very much ‘theology from above’, so the Eucharist is not so much seen as a humanly-devised act of worship as something given by God to which we must faithfully respond. In fact, at times the book reads rather like something Karl Barth might have written had he been a high-church Anglican rather than a Swiss Calvinist.