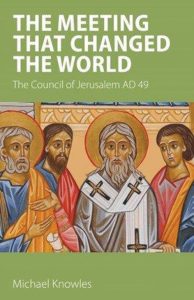 The Meeting That Changed the World

The argument of this book is that the Council of Jerusalem in AD49 as outlined in Acts has been underestimated. Whatever detailed negotiations led up to its conclusions, it liberated pagan Christian converts from needing to follow the full rigours of the Torah. This traumatic but necessary step changed Christianity from being a local sect into a world-transforming faith. The author, a Roman Catholic, uses this model to challenge his own Church: if it is not prepared to ordain women and accept other similar reforms, its numbers will continue to decline. He is thus revealed as the kind of Vatican II-affirming Catholic who would be sympathetic to the present Pope. He would, of course, be strongly opposed by the neo-traditionalists in his church, some of whom are showing an odd disloyalty to that very Pope whose office they claim to venerate. Although the book is perhaps too long as it trawls through the New Testament, it offers a challenge particularly relevant in this year of Cardinal Newman’s canonisation: in the light of his Essay on the Development of Doctrine, how far can you embrace radical change while staying true to the deposit of faith?