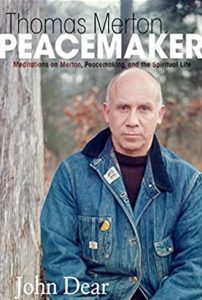 The author of these ‘Meditations on Merton, peacemaking and the Spiritual Life’ is himself a committed worker for peace. This comes out strongly in his choice of extracts from Merton’s letters and journal entries, as well as his own comments on Merton’s life and views. Consequently, it offers a rather different stance from Merton’s earlier autobiographical writing in The Seven Storey Mountain: the stress in Dear’s book is on Merton’s choice not to fight in the war and subsequent desire for ‘nonviolence’ – a word repeated to an almost annoying degree throughout. The book is presented as a series of twenty-seven meditations, an interesting format. I found the earlier ones rather repetitive; the later ones were much more effective in provoking thought and empathy with the views expressed. It is, however, a book of interest that illuminates the spiritual life of a peacemaker.