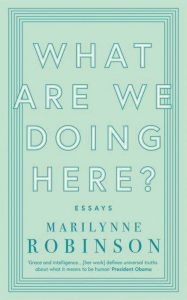 What are we doing here?

Marilynne Robinson, a fine novelist, is also a University teacher, visiting lecturer and essayist. A member of the United Church of Christ, she is a staunch evangelist for the Reformation Church and Puritans, an admirer of Wyclif, Calvin, and Jonathan Edwards, and suffers a divine or prophetic discontent over the ‘alarming like-mindedness’ of American discourse and its ‘shared false assumptions and flawed conclusions.’ ‘Too old to mince words’, she is a thorn in the flesh of left and right politically. She abhors ‘ideological thinking’ because it is not one’s own. Of The Givenness of Things (2015) one reviewer summed up her wisdom, insights and constructive criticism as ‘Standing up for the USA’. Intrinsically American, and also a citizen of the world, she questions in these essay-lectures, among many things, the campaign to smear Obama, estranging him from history; the traducing and downgrading of the Humanities; sloppy thinking; slander, the dangers of the tongue, and her own mother’s becoming a Fox News addict; the power of fear; and science and technology’s irresponsible dismissal of religious faith. Robinson is an important voice for unity, sanity, humility, imagination and the wonder of being human.