Does Religion Do More Harm Than Good? 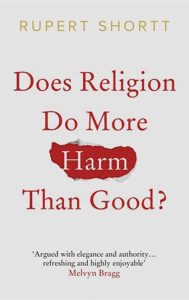 Does Religion Do More Harm Than Good?

In eighty pages Shortt sets out to rebut the arguments of Hitchens, Pullman and others hostile to religion because of the harm it has caused. Following a well-trodden path, he argues: first, that one must distinguish between what religions teach, in terms of openness and tolerance, and the abuse of those same teachings by believers; second, that, properly understood, the ethical dimensions of all religions create an environment in which human beings can be most fully themselves. The writing, replete with references, is very much of the style, ‘on the one hand’ but ‘on the other,’ in order to appear even-handed, but inevitably the atheists fare badly. Occasionally in his exposition, despite his best intentions, he strays into implicitly negative judgments of non-Christian religions, thereby risking the kind of simplistic generalisation he warns against; but his conviction that all religions contribute to the general well-being, by urging us to embrace a vision of life that is broad and inclusive and not confined within a naturalistic perspective, is surely one which all readers of this journal would endorse.